As athletes arrived at a darkened transition within the new location of the harbour car park, tension built before the final stage. With the tide turning and the wind increasing at first light, athletes waited patiently as the swim course was secured.

As the first athletes set off and made their way through the waves, athletes were welcomed to a change in current which made the return swim challenging. As athletes returned from the swim, it was Oli Simon and Josh Jones who left the water together with swims clocking 8:52 and 8:54 respectively. Within the female race, Roxburgh set the tone early, building a 57 second lead over second female swimmer Emma Palfrey, with Rhondda’s Paige Horsnell a further two seconds behind. As the swimmers exited the water, those in the standard race re-entered the sea, only to be met by some confusion as the changing tide affected the swim course. 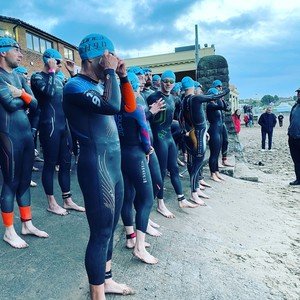 After a swift transition at the front of the race, it was Jones who overturned the two-second gap on the swim to build a narrow lead over Simon on the bike. With Jones and Simon battling it out at the front of the race, the race behind was hotting up with George Comins, Stephen Rowlands and Jonathan Phillips all clocking sub 33min bike times. Within the female race, with Roxburgh leading the way, Carys Hughes was catching up with Palfrey and Horsnell, narrowing the gap on the bike leg.

Soon enough as the winds and showers passed through, runners made their way to the picturesque run of the Knapp, island and nells point. With Jones running through the Eastern Shelter towards Nells Point on the first lap, he’d built up a 15 second lead on Oli Simon, and as the rest of the field all made their way around the run, the two leading males found themselves in a neck and neck finish.

It was Joshua Jones who crossed the finish tape first, but with the staggered start and Oli Simon quickly following him over the line, it was Simon who took the top spot on the podium by 7/10ths of a second on 59.29. The stage win also guaranteed Simon with the overall and male veteran series win following wins at Pembrokeshire and Bala. With Josh Jones a close second in his first stage of the series, the final podium spot was taken by George Comins, who also took the male senior category. 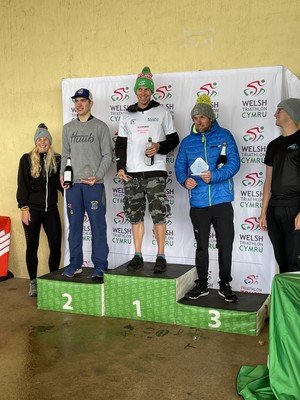 As the rest of the field crossed the line, the other series categories started to take shape. The male and female vintage veteran categories were already secure prior to the last event, with Gareth Bowyer and Rebecca Comins taking both awards respectively. A strong showing by Stephen Rowlands, consistent all series, saw him take third on the overall male podium and a narrow second to Oli Simon in the male veteran category. A category win for Pembrokeshire’s Elizabeth Williams secured the second spot in the female vintage ahead of Jennifer Aylward, whilst GOG Emer Sandham secured second in the female veteran category, pipping Taff Ely’s Sara Morgan into third. 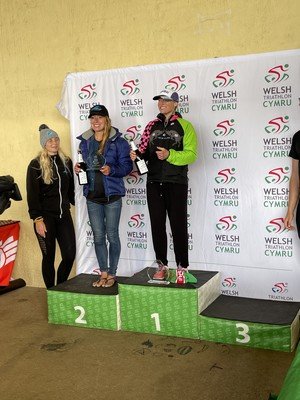 There was more success for Taff Ely in the male super veteran category as Ed Morgan took the top spot, ahead of Mike Haydn and Simon Osbourne. The Super Vintage Vet category was won by David Hill, whilst promising junior James Harries took the Male Youth and Junior category.

Across the teams, it was GOG triathlon that dominated the club competition. Consistent across every stage, it is safe to say the GOGs have truly embraced the club element to the competition as they defended the title last won in 2019. Taff Ely made their way onto the podium for the first time in the second spot, as the newly formed Dragon Tri took the third step.

Welsh Triathlon would like to congratulate everyone who took part in the Super Series this year. Its no doubt been a challenging time for everyone involved in the sport, but seeing our members, participants and clubs return to activity throughout the season has been a real boost for everyone involved. Welsh Triathlon would also like to thank those event organisers who helped facilitate the series this year, Pembrokeshire Triathlon Club, Dragon Tri, Tough Runner, Always Aim High and All or Nothing events. A special thanks also to DreamTeam TV, for the production of the series throughout the year.

The Welsh Triathlon Super Series will return for 2022, where hopefully, we will return to a six-stage series. Details of the 2022 Series will be released in the new year.

We are still awaiting confirmation of the Tim Tri Cymru races. Next years’ British Championships are yet to be announced, but we will inform those who have registered interest, and qualified by the Porthcawl, sandman and Barry stages of their inclusion over the next three-four weeks. If you have any questions regarding this, please email garethevans@welshtriathlon.org.

For a full breakdown of the 2021 Welsh Triathlon Super Series Results and Positions, please click here.