Ben & Josh are 10- & 11-year-old brothers who have cycled over 300km in total with 8849m of climbing on Zwift to raise enough money to fund 1 days of brain tumour research. When the boys heard that their 7-year-old cousin Jessica was starting her second battle against an aggressive brain tumour, they decided to raise money to help. Keen cyclists, they decided to used their Christmas holidays to cycle the 8,848m of altitude, to reach the summit of Mt. Everest on static, indoor bike trainers.  Their 8-day challenge involved cycling more than a minimum of 500m per day cycling on a variety of mountainous courses, the boys faced gradients up to 20% as they cycled to accumulate the 8,848m of altitude gain required to reach the summit. 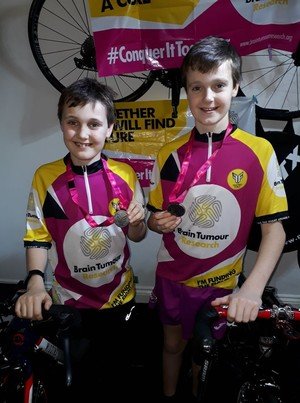 Asked 'Why' they had decided to do the challenge, the boys replied, "We were told by Mum and Dad that Jessica has to start chemotherapy again to try and shrink the brain tumour she has. We wanted to do something to help and we both love cycling, so we thought we'd try and set a tough challenge to raise some money to help. We heard about pro cyclists 'Everesting' (riding the equivalent height of Mt Everest in a single ride,) but didn't think our parents would let us do this, so with the Christmas coming up, we thought we could do it over the holidays instead."

The boys have so far raised over £5,000, enough for two days of research, an amazing effort. Not only have the boys represented themselves, their family and the charity, but they have also showcased their club, Celtic Tri, in the national media. Involving other children in the club to give them experiences such as chatting and zoom zwifting with Jonathan Brownlee. Geraint Thomas has also shown his support.

Celtic Tri has also been running several sessions and activities for the club members through the pandemic. These have included a 3-stage weekend on Zwift with tour de France-style awards for yellow jersey competition, best young rider white jersey, etc. The club also had several specialists talk to the juniors and parents around nutrition, recovery and health and well-being. |Like many a club, they have not been able to do sessions in person but have done 3 x weekly sessions over zoom, keeping connected.

If you would like to donate to the boys’ chosen charity and keep the great fundraising work going, please click on this link to donate. Well done lads, everyone attached with the sport are really proud of you.