Our final installment from Celtic Tri this week is from two of the clubs’ original members. Jayne and Paul Arnold have been an integral part of Celtic Tri since day one, and are two of only ten people to complete each IMW to date, with Jayne, being the only Woman. Here’s Celtic Tri, and Welsh Tri’s Iron Couple story in their own words.

“I started doing triathlons back in 2002” remembers Jayne when asked when her triathlon journey started.  “At the time, Paul was injured from playing rugby so came to watch me do my first race - a sprint-distance event in Fishguard” remembers Jayne, whose husband Paul was a first-class rugby player with Swansea and earned 16 caps for Wales. “It made a change for Paul to be supporting me as I had been watching him play rugby every weekend since we met in 1995”.

When asked what it was about Triathlon that attracted them, without hesitation, Jayne remembers “The buzz of the event had such an impact on us both that we decided by 2003 that we would both do a triathlon”. From this point, it escalated very quickly. “Shortly after Fishguard, we were completely hooked on the sport and by the summer of 2005, we completed our first Ironman in Austria. Later that year Celtic Tri was formed and we were thrilled to be part of this new triathlon club. Paul was responsible for designing the club kit which was an amazing opportunity for him but also superb for us to be able to create a brand for the club – a brand that has lasted over 15 years. The kit gave us our identity and it was something members would be proud to race in”.

When asked what was special about Celtic Tri and the benefits it brought, Jayne describes the time with the club as being  “a truly awesome experience which has created the opportunity to spend time with like-minded people. The ability to learn from other people who have the experience and battle scars was invaluable and now years later we find ourselves in the privileged position of being able to give others advice – based on us having probably made every mistake possible!”

The club has played a very important part in the Arnolds’ drive to continue to race endurance events, none more so than IM Wales. When asked what it is about IMW that makes it so special, Paul states that “The support is what keeps us coming back year after year knowing that it is one of the toughest races on the IM circuit. One of our most favourite memories is at the top of Wiseman’s Hill – the support you get from our club members is phenomenal and just the thought of it makes the hairs on the back of your neck stand up. You can hear the cheers for other club athletes as your approaching the top but when our guys see the Celtic Tri colours they raise the support to a whole new level – you feel like you are flying past and any doubts or pains in the legs just melts away.” 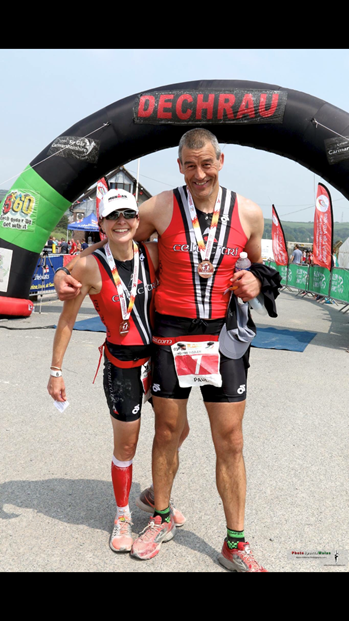 Jayne adds “What can we say about IM Wales and why do we keep returning…. In 2011 I was unsure as Wales in September can be very unpredictable and the cold weather and rough sea is not something I enjoy. Paul on the other hand loves the cooler weather and sees the swim as a scrum in water – taking him back to his rugby days. Anyway, long story short we entered it and loved it. The unpredictability makes me terrified but also spurs me on not to allow the Dragon to beat me. For a few years we did IM abroad earlier in the season and then IM Wales to finish the season but the last couple of years we have realised that we aren’t getting any younger and we want to keep racing for as long as possible so we stick to Wales only. There are only 10 of us left that have completed all 9 IMW and I am proud to be the only woman”.

And so to 2020, what’s now in store for the Arnolds with the pandemic having halted the events calendar? “This year was so unpredictable with training holidays and events cancelled. We were due to cycle in the Alps, something that had been on our bucket list for years but sadly, it was not to be. It’s definitely something we will do sometime in the future though”.  Paul added that “We managed to keep some form of training up during this time, we are lucky enough to own a watt bike and made the most of the extra time we had to cycle and run. Living less than a mile from the National Pool in Swansea we were able to return for a few months and again we made the most of the time we had there, always remembering that we do this for fun and realising that we won’t be in this situation forever”.

You can hear more about what’s in store for the Arnolds, and their hopes to continue to tame the dragon on Welsh Triathlons’ TriPod, which is being released next week.