Claire Higgins started her triathlon journey when her brother entered her into her very first event to mark turning the big 40.

Claire, from Leeds, has gone on to compete in aquathlons, duathlons, triathlons, GO TRI beginner training sessions, and completed a British Triathlon Activator course. Claire is now booked on to become a Level 1 triathlon coach in September. Wow! 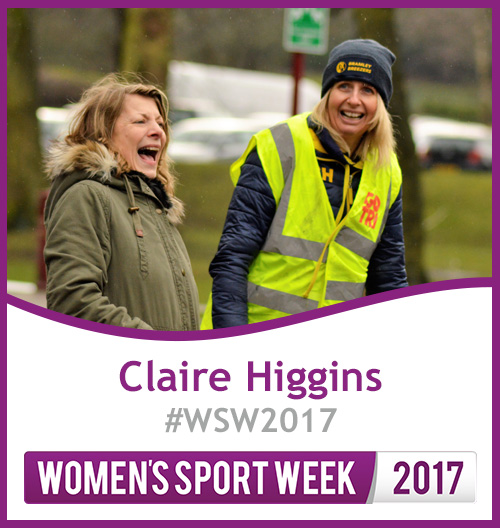 Claire shares her triathlon jouney, as part of our women’s sport week celebrations. We hope her story, along with other women we’ll be featuring this week, inspires more women and girls to get involved in sport and give TRI a go!

“When I turned 40, my elder brother decided the perfect birthday present would be to enter me into a triathlon! Something I’d never done or even considered before, having a massive fear of water and not being a great swimmer, not ridden a bike since being a child and as for running, well I just didn’t do it! So, where the triathlon idea came from… it was time to take on a challenge and face my fears at 40.

“I had four months to train for Driffield Triathlon and ‘had to’ prove to him that I could do it! And I did… in 1:44:55! I accepted the 40th birthday present, took on the challenge, completed it, but wasn’t hooked. The swimming costume went away and so did the bike, but I found I quite liked to run, so I continued to run on my own for a while before joining the local running club - Bramley Breezers.

“I met some amazing people at the running club, who encouraged me to try triathlon again.  As a group, we entered all the local GO TRI events; Aquathons, Duathlons and the Triathlon. I then started to get into the GO TRI gym training sessions and took up spinning, and started swimming sessions with Fiona Hoare at The Edge.  I also joined the local Tri Bramley Baths Group for more swim practice – this was when I became hooked! It was great fun and something I could do with some amazing friends I’d met along the way. My ultimate aim being to do the Driffield Triathlon again, and enjoy it… I did it!

“Taking part in Triathlon has been an amazing roller coaster of a journey. I’ve had ups and downs with injuries and illness, but it’s not stopped me wanting to continue.

“My swimming has improved greatly and I no longer have a fear of the water. My friends described me as being ‘completely useless’ at it when I first started, and used me as an example to others who say they cannot swim! I couldn’t swim front crawl, but now I can and if I can do it, anyone can!

“My cycling is coming on and I’ve now progressed to clipping in, but this is still a learning curve and I constantly forget to unclip before I stop and fall off, but hey-ho the extra padding on my bum is coming in useful!

“As for running, well I’m doing okay with this and enjoying it.  I’m now a run leader with the Bramley Breezers and absolutely love it.

“I’ve also recently completed the British Triathlon Activators Course and am booked on the level 1 Triathlon Coaching Course in September 2017.  I love the fact that I can give something back to someone else and hopefully encourage others to take up what is such a fantastic sporting activity.

“If it wasn’t for my brother, I would never have given it a go but I’m so glad that I have and I wouldn’t change a thing!”

Inspired by Claire’s story and wanting to give TRI a go? Visit gotri.org to find GO TRI gym sessions and events near you.

Could you be our next case study?

We’re always on the lookout for stories to share. If you’ve got a great GO TRI story, drop us an email info@gotri.org and we’ll be in touch to find out more.