Sunday (26th) saw the National Aquathlon Championships held at Whitmore Bay, Barry Island with the running of the SWYD Aquathlon. Ideal conditions welcomed the hundred athletes for one of the last events of the season, a Sharp 750m sea swim followed by a 5k along Barry promenade.

As the morning sun shone down on Barry prom, all participants were fired up and ready to attack the swim. It was the youngsters who made the best impression when in the water. Ben Merriman of Torfaen Tri exiting the water first in a time of 9:25. Ben was swiftly followed by Tristan Cumberland, a little over a minute beh9ind in a 10:46. Alyssa Baker was the first female from the sea, another of the talented swimmers from Torfaen, in a time of 11:53. All three were competing across the youth and junior categories.

As the reminder of the field began to exit the water, the youngsters had begun their journey to Nells point in the warming September sun. By this point, athletes of differing experience began getting into contention. Standard Triathlon Champion Chloe Dooley exited the water 90 seconds down on Alyssa Baker, whilst senior contender Oliver williams, veteran Gethin Parham and Vintage veteran Martin Cole began to claw back on those at the front of the field.

As the final athlete exited the water, we were already welcoming home the front of the male race. After a solid Swim, Tristan Cumberland posted an impressive 5k run time of 16minutes 30 Seconds to take the Overall Male title as well as the Male Junior category. This run was enough to claw back the 90 second lead of Ben Merriman, and extend a three-minute lead, as Merriman crossed in second place in an overall time of 31:40. A solid 18minute run form White Rock’s Oliver Williams saw him close the gap on Merriman, but not enough to take second spot, as he crossed the line in a time of 32:17, claiming third overall and first in the male senior category. 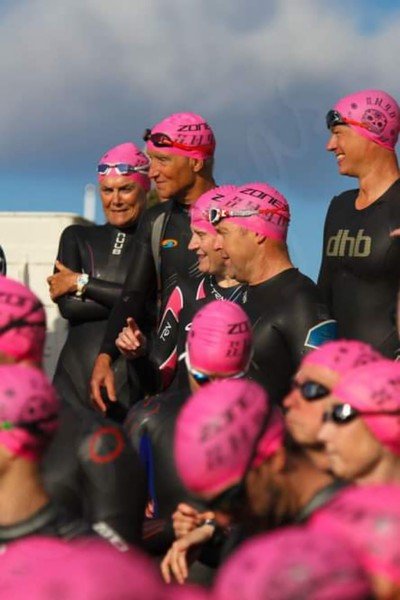 Within the female race, Dooley continued her impressive form from the Porthcawl Standard with a run time of 19:58, clawing back time on Baker and taking top spot on the podium for the overall win, as well as first senior female. A further 90 seconds behind, Eloise Crowley of Cardiff Triathletes took second in both categories, as she crossed the line in 34:37. Third overall spot went to another member of Torfaen, Emma Price Stephens, as she clocked a swim time of 12:32 and a run of 21:33 to finish with a total time of 35:16. Other impressive performances were seen by Susannah Bulpin, who finished in 36:10 to win the female veteran category, and Baker, who did take the female Junior category with a time of 36:12mins.

Commenting on her victory, Dooley was delighted, but was looking forward to what next season may bring. “It’s been a good year; I’ve really enjoyed the change to triathlon. Winning at Porthcawl was a great experience, and I’ve even progressed now to wearing cleats on the bike! Today was great fun, and I look forward to getting in a good off-season, working on the Swim and the bike and really give the Super Series and National Champs a go next year”.

The aquathlon series are a great introduction to multisport and are often used by newcomers as a stepping-stone to full triathlon. One of those at the SWYD Aquathlon was Caerphilly Trier’s Eimear Fitzgerald. Taking part in her first multisport event having previously done numerous runs and the occasional marathon, Fitzgerald crossed in the middle of the field with a time of 48:34. “I really enjoyed my first aquathlon this morning. I felt it was really well organised which straight away put me at ease. The swim was great and the run went well also. The route was well sign posted and the encouraging stewards put a smile on my face! Everyone involved was really friendly and helpful. I went away feeling proud and excited for my next event which will be a sprint tri in mumbles in October!” Fitzgerald commented.

For those in a similar position, next year will see a number of great aquathlon opportunities, with calendar regulars at the Aberavon Aquathlon series, Bryn Bach Aquathlon Series and Monmouth Aquathlon. SWYD Aqua will also be back, as well as a number of potential next aquathlons linked to Welsh Water locations.

For a full breakdown of the SWYD Aqua results, please click here.

We return to Barry Island on Sunday (3rd October) for the final stage of the Welsh Triathlon Super Series with the SWYD Sprint Triathlon. With a number of categories wide open, the final stage promises to be fast with some exciting racing. Gog Triathlon’s Gareth Bowyer has already wrapped up the Male Vintage Veteran category and is going for the clean sweep in 2021. It’s the same situation in the female vintage veteran category, with Rebecca Comins already wrapping up the series.

The female overall series looks an exciting prospect with Rhian Roxburgh, Emer Sandham, Carys Mai Hughes and Mared Dafydd all looking to improve their current scores as the current 1st placed female, Pembrokeshire’s Catherine Marks watches on. Within the overall male category, eyes will be on Olly Simon as he completes his third event of this year’s series, looking to challenge current podium of George Comins, Matthew Davies, and Stephen Rowlands.

Its going to be an exciting weekend. You can watch the stage back next week on S4C, Friday at 8:25pm and you can watch back all the stages so far on BBC iPlayer. Good luck to everyone taking part.