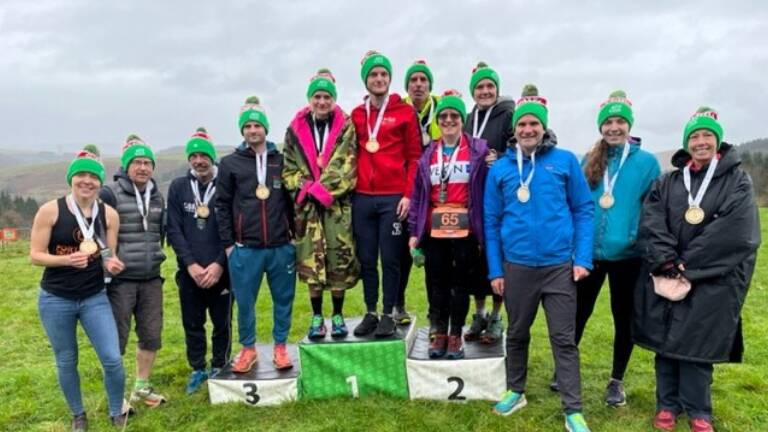 The Welsh Triathlon Super Series returned on Sunday 8th August for Stage 2, held at the Porthcawl Standard Triathlon. This was also the 2021 National Standard Distance Championship which saw an impressive performance from Chloe Dooley on debut, as well as 2019 winner Liam Lloyd returning from injury.

A windswept Porthcawl was the scene for stage 2 of the 2021 Welsh Triathlon Super Series, and with both male and female overall winners from stage 1 not making the start line, the door was wide open for athletes to build their scores.

With blustery conditions affecting large parts of the course, it was decided by organisers and technical officials that the swim be reduced to one lap of the 1500m course, welcome news to the 240 participants who had braved the conditions.

With an impressive crowd overlooking the beach from the harbour wall, athletes entered the sea at coney beach in two’s, a measure maintained by organisers with covid restrictions easing across Welsh events.

Having got beyond the initial surf it was Lloyd Rosewell and Liam Lloyd who exited first, with Alex John, Matt Grantham, and Jack Smith exiting as a group ahead of the rest of the field. Hannah Jenkins was the first female out of the sea in a time a little over 9 minutes, followed by debutant Dooley twenty seconds behind.

As athletes entered and exited T1, the field began to take shape, but having exited on the bikes, athletes were welcomed by a wall of westerly wind along with exposed parts of the course which undoubtedly emptied some tanks quicker than anticipated. At the front of the female race, Rhondda Tri’s Horsnell, Bynea’s Caryl Williams, and Dragon Tri’s Rebecca Comins made inroads on Dooley, as her lack of cleats on the bike resulted in losing up to 9minutes on some of her closest competitors during the bike stage.

Within the male race, George Comins posted the fastest bike stage in a time of 1:00:50, followed by Lloyd and Dragon Tri’s Kyle Blackmore. With a large group of athletes consisting of Dragon Tri’s Matthew Davies, Tom Graham, Tom Danter, and Jonathan Phillips, as well as Iwan Jones (Total Tri Training) and Matt Grantham (Tri Monkey) not far behind, it was all coming down to the two-loop run to Rest Bay, and how well athletes had managed to save the legs in the windy conditions.

Like the bike course, the run posed the challenge of the wall of wind, as athletes were challenged by two 2.5k runs into the westerlies. Thankfully, this did provide some assistance to those on their way back to Porthcawl, but as the run progressed, gaps emerged for those who managed their outward journeys the best. 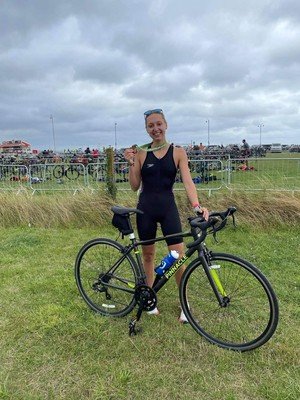 None more so than the female race winner Dooley. Having saved almost a minute on her rivals in T2 thanks to already wearing trainers, Dooley began to swallow the field of female runners in front of her. With a run time of 39.54 (her closest rival 6 minutes behind), she managed to cross the line in a total time of 2:14:42. Horsnell who had been caught on the final run leg finished second two minutes behind in 2:16:44 and Caryl Williams finishing third a further 48seconds behind, having made the final podium spot during the latter stages of the run.

Having built a significant advantage over the first two disciplines, it was Lloyd’s race to lose, but a comfortable run of 33:53 saw him first cross the finish line in a total time of 1:44:56, his first domestic race back since Injury at the British Series event back in May. George Comins held onto the second spot on the overall podium following a consistent performance, with local Matthew Davies sealing his spot on the podium by 12 seconds over Iwan Jones.

With significant representation from the organisers, it was Dragon Tri who took home the most points from stage 2, with a total of 480 category points taking them to the top of the team leader board. Another consistent performance from Cardiff see’s them sit in second, whilst last years club champions, GOG Triathlon currently sit in third. There were good scores produced by Taff Ely (355) and Rhondda Tri (316) which currently places them fourth and fifth, but a lack of representation from Pembrokeshire sees them slide from the top spot down to 6th overall. 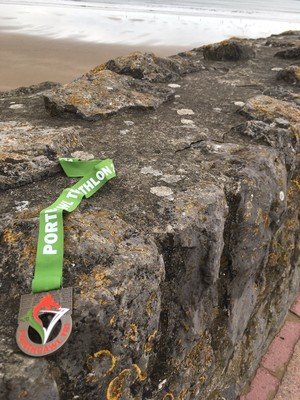 From a Welsh Triathlon Super Series perspective, with previous stage winners Alex Matchett and Liam Lloyd having only raced one stage each, it’s Dragon Triathlons’ Matthew Davies who currently leads the series following his Porthcawl podium and his fourth-place finish in Pembrokeshire. Within the female race, a similar story, which sees the consistency of Taff Ely’s Sara Morgan leads the female series following her two top 10 finishes.

A full rundown of the Porthcawl Standard race results, as well as the Category awards for the National Championships (Valid Welsh Triathlon Members Only), can be found here.

A results table following stage 2 of the Welsh Triathlon Super Series can be found here.