It would be an understatement to say Welsh triathletes have had a Commonwealth Games to remember. The largest athlete team ever selected to represent Wales at a Commonwealth Games were supported with their preparations by Team Leader Louis Richards, Head Coach Luke Watson, Support coach Vicky Johnston, Physio Jessica Parry-Williams and mechanic Glenn Coltman. After arriving at the team house for the week on Tuesday the stage was set for a memorable weekend of racing.

The men were up first, with 2018 team member Iestyn Harrett looking to make his mark in his first outing in the individual event, alongside him and making his CWG debut was 2021 junior world medallist Domonic Coy.

Iestyn delivered a near faultless swim and bike that saw him in the main chase pack of athletes coming onto the run. A 15:41 run split on a hard 5km run course meant he finished the day in 9th, the highest ever finish for a male Welsh athlete at the CWG.

Dom narrowly missed the main pack on the bike meaning he came onto the run 40s down on the main pack in front of him. Despite this gap he still managed to run himself into 18th with an impressive 15:35 run split, with in his words “plenty left in the tank”.

Onto the women’s race and another games debutant, Issy Morris finished in 19th place. Getting to the start line was a huge achievement for Morris who has had to battle back from illness and injury to secure her place on the team, a top-20 finish is a great first major games outing for this talented young athlete.

Non Stanford and Olivia Mathias both making their second appearance for Wales at a CWG were hoping to make their presence felt in a stacked women’s field. After a congested swim both Non & Olivia made it into the main chase pack trying to hunt Flora Duffy (BER) and Georgia Taylor Brown (ENG) down on the bike leg. Onto the run and Non showed her running pedigree with a 16:50 run split and a 6th placed finish. Olivia also showcased the improvements she has made in her running to outsprint South Africa’s Simone Ackerman for 7th place. 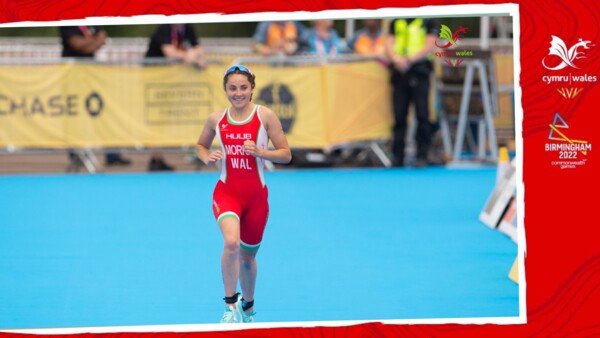 Solid performances across the board meant team morale was high. Getting straight onto turbos and eating pasta is the last thing you want to do after giving your all in a sprint distance triathlon but the athletes showed their professionalism as they prepared for the mixed team relay on Sunday.

It’s not often you get to be the first person to ever do something, but the second day of triathlon action at the Birmingham 2022 Commonwealth Games saw Rhys Jones become the first ever person to represent Wales at the Commonwealth Games. Dubbed Rhys squared, Rhys Jones was guided by NTPCW athlete Rhys James to a phenomenal 4th place finish, in a PTVI field packed with world class paratriathletes.

A controlled swim meant Rhys came out the water in 6th place. After a swift transition the pair laid down an impressive bike leg moving themselves into contention for the podium. Onto the run and Rhys gave it everything he had, emptying the tank to cross the line in 4th, a truly exceptional performance for an exceptional athlete.

The VI category in paratriathlon is a team effort, and Rhys Jones had one of the best teammates he could ask for in his guide Rhys James. James left everything out on the course, especially on the bike to support his teammate. A short trip to the medical tent post-race is testament to the effort expanded by Rhys James. There was barely a dry eye in the house as Jones, who is a father of two and devoted husband was reunited with his family. Described by Sport Wales as the middle-aged superhero, Rhys is a great example of what happens when a highly motivated individual gets the support required to pursue a goal.

“Our first Commonwealth Games and to be so close to family and friends and for them all to be able to come. For everyone that we love and care about to be here, it's an absolute honour and a privilege to represent my country, it’s always been a dream of mine.” 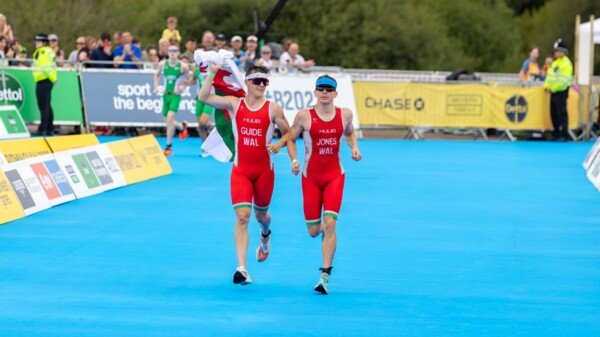 To finish off the weekend the mixed team relay.

There was a sense of composed confidence from the quartet on Saturday night in their team briefing. Everyone knew that if they executed their leg to perfection then we had a chance to podium.

The team of Iestyn Harrett, Olivia Mathias, Dom Coy and Non Stanford were introduced to the crowd (with perhaps more Welsh flags on display than English!) and the race was under way.

Each team member executed their part superbly. Starting for the team was Harrett taking the first leg of the relay he recovered from being caught up at the first buoy to ride an incredible bike leg followed by a blistering run to tag Mathias in fifth position going into leg 2. Thanks to Iestyn outsprinting south Africa to the hand over Mathias had clear water to swim at the start of her leg. Taking advantage of this Mathias executed a swift T1, a controlled bike and phenomenal run, sticking with Scotland’s Beth Potter to hand over to Dom Coy in third place.

The 20-year-old Coy in his first Commonwealth Games made back up some lost time from his swim leg with a strong bike, however it was on the run where he really showed his class, out running both Matt Hauser (AUS) and Tayler Reid (NZ) to hand over to Stanford in joint second place.

The team had done a phenomenal job to place Non in the perfect position to secure that podium place, and with a crowd full of Welsh Flags and cheers, she finished in style with an exciting sprint against Australia’s Sophie Linn to take the Silver.

“This is the icing on the cake of my career and I can hang my shoes up now and be really happy," she said. It’s all thanks to this team. It’s the perfect ending to a really old career. I’ll retire from racing at the end of this year. It’s just as important, if not more important, than some of my own individual success”

The celebrations continued shortly after for Coach Luke Watson, as he was launched by the team into the water in his Team Wales formal wear, Why? Because a deal is a deal. 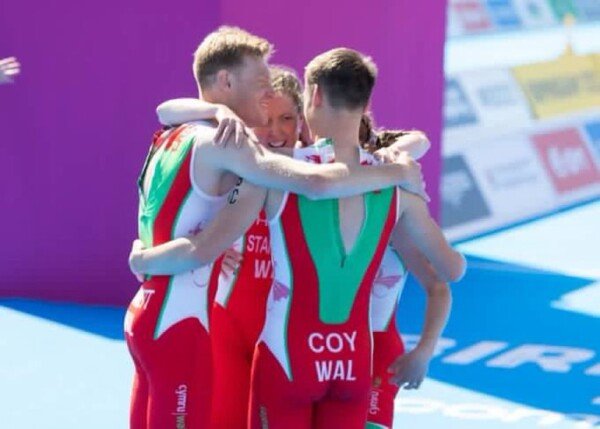 I'm so proud of the whole team, the athletes and support staff they were incredible all week - committed and professional, and the incredible results reflect this with Wales' best ever Commonwealth Games performance.

“I can’t really put into words what this team has achieved. We have been ambitious, supporting our largest ever athlete team, making sure we have planned the support required down to the smallest detail and ultimately uniting behind the pride of representing Wales on the world stage.

Watching seven athletes execute almost flawlessly over four different races is something I will cherish for a long time. None of this would be possible without the support of our incredible coaches, physio and mechanic. I couldn’t ask for a more dedicated and effective team and it has been an absolute career highlight and pleasure to have led them at these games”

"I couldn't be more proud of the full team from Welsh Triathlon at the Commonwealth Games Birmingham22. There were amazing athlete performances with the support of the coaching and support staff.  But also the very vociferous spectating staff and board directors joining the great family and friends support - a fabulous triathlon community!  Thank you to everyone involved." 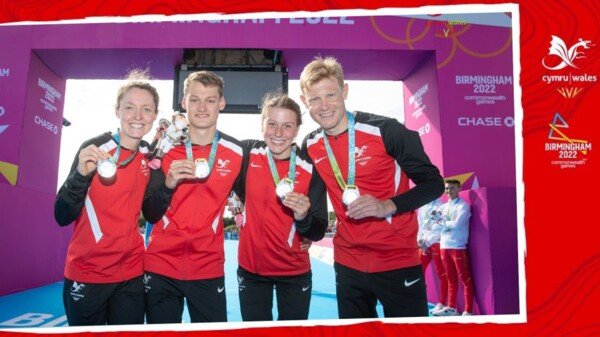