Mallory Park hosted the British Triathlon Grand Final; with 22 races taking place in one day, there was plenty of action and success for Welsh Athletes.

A new format for the Inter-Regional Championships saw athletes aged 11-14 race in heats and finals. The Welsh Team achieved 7th place out of 13 teams. Standout performances came from TriStar 2 athlete Libby Hale in 2nd and Josephine Hurst and Anna-Rose Merchant both top 10 in TriStar 3 female. The real highlight of the day was the great team spirit showed by all the athletes and the 100% effort put into each race.

TriStar Team Manager Rhys Thomas had this to say: ‘It was fantastic to see the return of the IRC’s this year, you could tell how much the younger athletes have missed racing. It was also a great privilege to be the team manager of this wonderful group, who showed great attitude and focus leading up to and during the event.’ 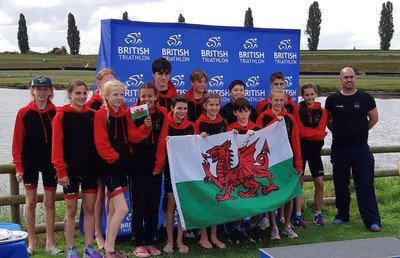 With four men in the top 10 and 3 women in the top 7, it was good to see National Triathlon Performance Centre Wales (NTPCW) athletes’ dominance.

In the men’s race after leading out the swim, Josh Lewis and Ollie Turner pushed a strong bike group away at the front, coming into T2 with a 35s advantage over the chasers before finishing off the race as 2nd and 4th seniors respectively.

On the last race of the day, the women delivered some great action. NTPCW athlete Tilly Anema led out the swim before riding with a strong front group of five which contained three NTPCW athletes. Onto the run and Jenny Manners from the performance centre made a triumphant return from injury to secure 1st Senior with Tilly Anema hot on her heels as 2nd senior. Ellie White rounded on a solid season with a 4th placed senior finish. 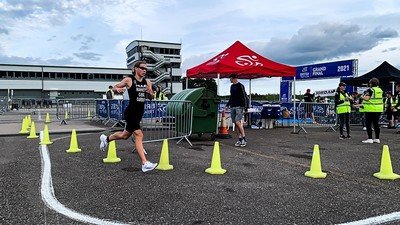 Luke Watson, Welsh Triathlon Performance coach said: ’I’m delighted with how the athletes performed this weekend. They have been building through the season to finish on a high like this is fantastic and well deserved. It’s been great to how the centre has grown in both size and performance level over the last few years and I’m really excited to continue to support athletes to perform at the highest level’

Welsh Triathlon Academy athletes also had a great day’s racing with Eva Edwards rounding out a superb season with a 3rd place in the Junior category and in a season-best performance for Deri McCluskey in the Youth races secured a 7th placed finish.

Development Coach Vicky Johnston had this to say:

“Mallory Grand Final was a fantastic event for triathletes across all ages and stages of the pathway. It is great to see Welsh athletes enjoying and performing in triathlon and we look forward to building on this during the winter.”

The Grand Final event ends the domestic elite season in the UK, with many athletes taking a well-deserved end of season break before turning their attention to the 2022 season. Welsh Triathlon Head of Performance Louis Richards shared some final thoughts on the 2021 season:

“Today has been a real celebration of triathlon and a fantastic way to showcase the results of all the brilliant work our coaches, athletes and volunteers have delivered over the last 18months. The highlight for me has been seeing the team spirit and pride across all our athletes, from the IRC team right through to the seniors in the NTPCW. The athletes’ performances reflect the quality of all our programmes, which are built upon holistically supporting people to achieve their potential. I would like to say a huge thank you to everyone involved and I’m looking forward to the 2022 season already!”

If you would like to find out more about any of our Performance Programmes, please use the links below.