Take a look at Martyns Lockdown running activity – one way to beat the blues – but cautious words for those taking on this kind of extended challenge too!

Like you, the effort and motivation to train when there is no race to see the outcome of your efforts was taking its toll on my motivation for what was to become our longest lockdown spanning winter 2020 and seeing us into April 2021.

Looking for a reason to get out of the house I turned my attention to City Strides with the intention of running (quite a lot of walking/plodding) all the streets of Cardiff. This started as a personal challenge to complete by the time lockdown ended in February. It didn’t quite go that way! 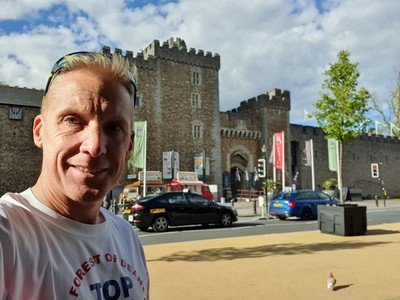 I had heard of City Strides several years ago and sync’d my Strava account up to see what percentage I had covered, not a lot as you’ll find! Even though I have been a keen runner for a number of years, the tendency is to step the same routes regularly, with little deviation.

So, a motive and challenge were formed and I set about completing the suburbs nearest my home and expanded out from there. Initially, this was a little tricky as I used the website to highlight what streets I needed to cover but also avoid ones I had been down before to make my efforts more efficient.  It didn’t take long before the percentage of Cardiff completed started to ramp up and I found myself climbing up the rankings too! All this turned into my competitive nature and spurred me on to cover more streets. Now it was November and houses were being decorated for Christmas which was great to see.  It’s not often at this time of year you find yourself navigating the streets nosing at other people’s property.

The weather proved kind and I was still wearing shorts at Christmas with nearly 50% of Cardiff ticked off. Running around Ely and Caerau gave a sense of contrasts having recently finished off Radyr and Llandaff.  What stood out was the vast size of these areas, not only do they cover a large part of the city but the roads seem wider and more spacious and at the highest points, the residents have some of the best views overlooking the city. But that said, there were also a lot of used mattresses and sofas in front gardens and plenty of people on scooters delivering door to door. I am not sure they were all delivering pizza!

I was on a routine and found that for every A4 map I would print out, it would be around 10km of running, tick off about 40 streets which would be close to 1% of Cardiff which has a total of 3514 streets to complete.

Come the new year I found myself in second place on City Strides but by February the honour and prestige of completing Cardiff first was to go to another, he had started a few months before me and really ramped things up once he got to 85%. 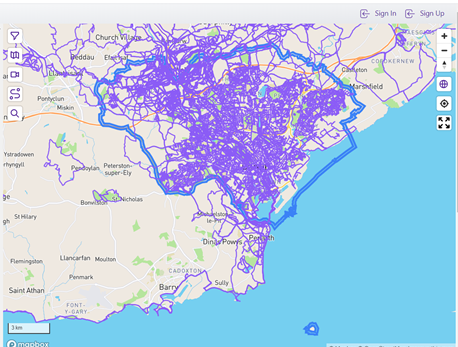 I persevered but the poor weather then kicked in and it was difficult to get motivated to run around the East side of Cardiff which I knew was full of cul-de-sacs! I found it bad enough running on concrete for long periods let alone having to turn around and tread them again!  At this point, I also realised there were one-off streets in each area I had missed, so a few days were spent ticking off 100m or so just so there was a GPS track to complete the map.

I seemed to spend all of April on 80%, but with the positive vaccine news, I knew lockdown was soon to end and the need to get this challenge done and dusted. This gave me the kick I needed to get on with it and so come May 7th I found myself running around the city centre for the third time. I had both a GPS watches and phone with me to ensure that the signal and location was near the spots on the relevant streets and not jumping around due to the higher buildings interfering with the signal. Then there was the case of being in an industrial estate only open between the hours of 9-5 on a weekday or running in circles on top of a car park just to tick of those nodes.

Like any race I have competed in I have forgotten most of the details.  Looking back it was all over so quickly. Things that do stand out are the number of sad scooters and Next bikes lying abandoned around the streets but also the number of nice houses on nice streets even in the most deprived area. No streets tidy or tips are nice to run along in a storm and in pretty much every area the pavements are terrible. I spend most of my time trying to run along the roads. It really hit home what a terrible time wheelchair users face daily and people with pushchairs trying to get past cars on the pavements too. 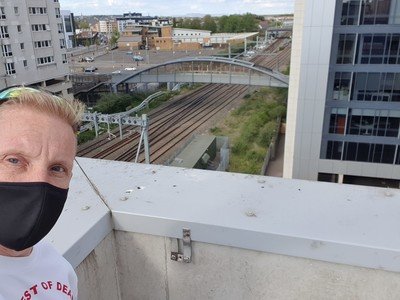 Overall, I clocked up over 1300kms and ripped holes in both my trainers as I refused to waste a new pair doing this challenge! It is a great tick in the box to be able to say I have run my city… everywhere! 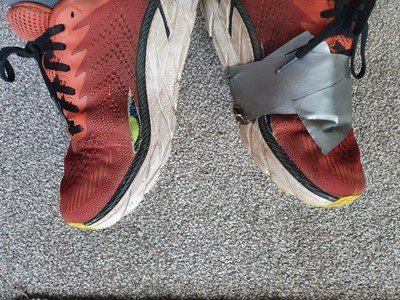 If you are thinking of doing the same… I probably wouldn’t recommend it unless you are needing a significant motivator! Maybe if there is another lockdown!! Then I would recommend doing it around Christmas and checking out the efforts people make to put on a Christmas show– it helps so much with those cul-de-sacs!