My brother Andy talked me into trying my first triathlon 17 years ago when I was in my early thirties. I was a confident (if not fast) swimmer and cyclist, but hadn’t run before. At the time, my confident swim was breaststroke, it had been years since I’d attempted a crawl.

My memory is patchy these days, so I checked with Andy - 2004, Mansfield Sprint, and apparently, I swam at least 10 extra lengths as I lost count. I still managed to not be the last place in the swim which is some consolation!  Some of the GOGs who’ve witnessed my inability to swim and count (or avoid crashing into the wall, barrier, other people etc) at the same time will be entertained by this, I’m sure.

My abiding memory of that first tri though is seeing Andy at the end, when he said he’d never seen me look so happy as I did running off the bike. That memory of running with jelly legs, with a big daft grin on my face, has always stuck with me. 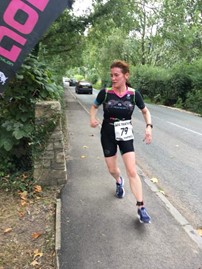 I did 3 more triathlons, and enjoyed them just as much, but then my career took over my time. Running, biking and swimming still happened, but sporadically, and squeezed into early mornings and weekends off, and occasionally a lunchtime run with an office friend, when we could fit it in. By the end of my 30s, I was diagnosed with MS. It felt like the end of the world, and in a way it was. At least it was the end of the world as I knew it.

Through sheer bloody mindedness though, I carried on running. Running used to be a thing I perceived as something I did for my physical health, but now it was something I needed to do for my mental wellbeing. It was along the lines of “as long as I can do this, then MS can’t beat me”, so I carried on. I would regularly run in the woods with my dog, crying because my hips hurt so much, realising they would always hurt, whether I ran or not. So I was going to run anyway. I set myself a target to run my first half marathon and started with the Snowdonia half. Not one to make it easier on myself. I did a few more, just because it felt good knowing I could.

My then partner (now husband) Jon had always said he wanted to try a triathlon after hearing me tell him about the buzz of putting all three together. At the time we lived near Llanrwst, where the GOG tri is held. He’d come running and cycling with me and was irritatingly far better at them than I was, but we weren’t into date nights, we preferred long bike rides and fun runs off-road with our dogs, so that suited us just fine. When he decided he was going to give Llanrwst tri a go, I knew I’d be seething with envy if I didn’t race too.

We’d got married at Christmas 2016. We had a cracking party, but after seeing the photos realised how much weight we’d gained, so we’d decided to sort it out. We set off training in earnest and in 2017 competed in Jon’s first-ever, and my first triathlon for a long while. It was as much fun as we’d hoped for, and here we first encountered the GOGs and saw how positive and encouraging the general atmosphere was. 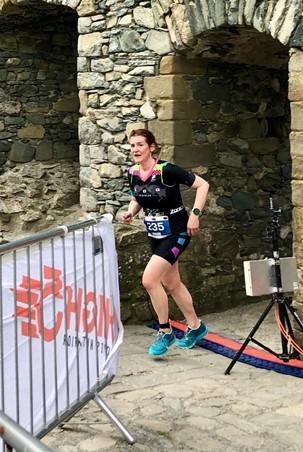 I was very apprehensive about joining the GOGs and joining in with training sessions. I thought I’d be trying to join an elite crew who would find me, well, pathetic. Some of them are really quite elite, but I was wrong about the pathetic part. Usually, mentioning MS can cause some awkwardness, albeit entirely well meant, so I’d learned to be a little cagey and careful what I said about it.

I felt really uncomfortable at first, with questions about things like why I use toe clips, the equivalent in cycling nowadays of riding a Penny Farthing. The answer is that my dyspraxia means my attempts at cleats cause me to fall off a turbo, let alone on the road, and it’s the sort of conversation that can get uncomfortable quickly among non-sporty people. I soon realised my defensiveness wasn’t necessary among GOGs.

I was used to, and frustrated by, people telling me to take it easy, to not push myself. Joining the GOGs was a revelation. Most people over a certain age have some kind of injury or weak spot, so my own weakness is just another “injury” so to speak. It’s ok to talk about it, and people have lots of great advice about different things that have worked for them. Being able to laugh with people about my trips and falls and general MS moments is priceless. It’s an incredibly positive environment, filled with athletes of all abilities.

After joining a Tri Rox Training group, I quickly realised that a personal coach would give me the motivation to train more regularly. I viewed the fee as a sort of insurance, holding back the disease and its disability. Rhian Roxburgh and I have been on a learning curve together to find out what works for me in training. We’ve pushed my limits and learned what is beneficial and what is too much. The biggest lessons have come from when I’ve been relapsing or otherwise ill. When I am ill, I have to keep moving, or my body quickly seizes up, muscles go into spasm and things stop working. If I push too hard I’ll fall over or exhaust myself one way or another and go into that decline anyway. We’ve learned that HIIT, short but intense sessions get the best results. I’ve had improvements on my pace, which isn’t something that’s expected to happen with MS, especially when you’re pushing 50!  Rhian probably knows more about the day to day realities of MS for me than anyone other than Jon. As my coach, there are details I tell her that I wouldn’t bore other people with because they are relevant to training. A good coach hears you and listens, and it has taken me time to feel like I can speak about my reality, but now I can. Thank you, Rhian.

One of the biggest losses for me with chronic illness was my career and the confidence that came with it. I had a demanding and rewarding job, involving contact with a huge number of people. The daily fatigue, more than any other symptom, took that away from me. My world shrunk horribly and suddenly, and I’m sure it’s a common experience. Joining the GOGs opened up my world again, it’s given me the social contact I’ve been missing. Getting myself to that first club session was difficult, but put me on a life-changing path. The benefits of exercise for MS and other chronic illnesses are proven, both in holding back disability and in recovering from relapses, and the mental health benefits are immeasurable.

So, to finish, I want to say that if you are facing the end of the world as you know it, keep moving, it’s the best medicine, for your body and your mind. Definitely consider your local tri club, it isn’t filled with elitists who will look down on you. Be brave and give it a go. You’ll find athletes of all abilities (yes, I call myself an athlete now), who are all about encouraging each other and cheering each other on.