I suppose all my problems began in 2009. I crashed my bike and broke my pelvis in 3 places, fractured my neck and the base of my humerus bone as well as a  cracked shoulder blade. It was a difficult and extremely painful time. I mourned the loss of my summer season from my sick bad and many events had to be cancelled as I got on with my rehab and recovery. I was told I would probably not be able to run again as the damage in the pubis ramus was so close to my hip joint, might cause me problems and if It did would potentially need a new hip in the future. It took me 6 months to get back on the bike and 15 months to run again.

Since that awful day, I have run 7 Marathon distances, including the Snowdon Marathon 3 times, as well as countless, halves and 10k’s to boot. I am not very fast on my bike or feet as my top end speed had gone, but I was getting mature in years and was grateful to be still able to do what I loved to do, so I was happy. I had ridden with Energy Cycles prior to my accident for over 10 years, however, after the accident, I was never able to keep up with them on the Sunday club rides, so I made a decision to bow out and leave the steam train to the boys. I was not finding it pleasurable anymore and I did not enjoy chewing the tarmac to keep up as the pace was very pretty fast. During this time I was playing around with Triathlons and had been involved in crewing for Tri ultra-distance events, which involved me more or less going the distances pacing etc, so I thought what the heck!!

I was a decent swimmer as I swam at county level in backstroke whilst at school, (ironically, due to my broken humerus and shoulder, I cannot do backstroke very well anymore, but muddle through the swim). I was running mainly to keep fit; I wasn’t brilliant but knew I could improve, and the bike was my first love so knew this was just a matter of keeping the legs turning. The sting in the tail was during this period of rehab, I started having trouble with my stomach and digestive system; periods of awful joint pain accompanied by really bad fatigue. My Doc thought a touch of IBS due to the trauma my pelvis had suffered and I agreed. I carried on with my training and competed in my first Triathlon which was in Southport during 2011 and I loved it. I won my Age Group it was a really friendly event a fundraiser, from there onwards I was hooked.

Fast forward to 2013 with a handful of Tri’s under my belt I started to feel really ill. My IBS had turned into a much more serious condition, it was actually a condition called Ulcerative Colitis, which is an incurable autoimmune disease that is very difficult to get under control, but with the right drugs comes periods of remission. I never had IBS, my Consultant told me the condition I had is part of the Inflammatory Bowel Diseases, which includes Crohn’s Disease and sometimes major trauma can be the trigger the illness to become active and troublesome. I was hospitalised for 2 weeks. There were lots of IV drugs to get it under control as my colon lining was ulcerated and bleeding due to chronic inflammation of the Gastrointestinal tract. Food was very much out of the loop as I was extremely poorly, it’s an awful disease and can strike down anyone. Sadly this is a disease that is unpredictable, but with the right medications you can live a ‘normalish’ life with plenty of ups and downs, and you have to accept that sometimes you cannot get to the starting line, either due to being in hospital or just getting over the flare that put you there. On several occasions from my hospital bed I thought everything was over, I felt I was never going to be able to participate in sport again, but slowly I recovered and took to my training again, I have never given up and I am incredibly proud of finishing all the events I have entered.

I love Tri. I love the friendliness of the sport and I find the community incredibly supportive. My plan is always to finish, get my medal and enjoy the day. The buzz of a Tri is awesome. I have been very lucky, I have managed to compete in many Triathlon, from Sprints, Olympics, Middle and Ironman distances. I have won many trophies for Age Group wins, and even a Gold for the Welsh Tri, Middle Distance, 50+ which I’m incredibly proud of as I wasn’t 100 percent that day. I have qualified for Kona ( even though I couldn’t go) and managed to become 1st AG 50-54 Ironman in the UK, and 77th Globally. Not bad for a lady with a soul-destroying condition. 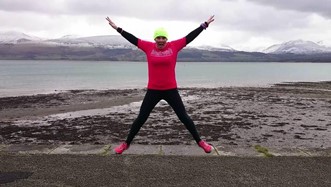 My joys in recent years have been competing in the Welsh Super Series, it’s been such fun, even though I thought the 2019 season was all over before it started as landed back in hospital in March, but I came back and enjoyed it so much with the Gog Triathlon club. It was awesome to be part of winning the Welsh Club Champions for  2019, despite a very rocky start for me.

My advice -  Never give up. We are always stronger than we think.

I come from a generation of ladies, who really didn’t do much in the sports arena. I loved my bike from a tender age and my mother was unable to get me off it. This passion grew with me and I have spent many of my younger years as a pretty competitive cyclist, trying to get more women involved in the sport, and many a Sunday club ride seen me excited to have another female rider when we managed to recruit. It gives me a lot of joy looking around now and seeing the new generations of females involved in sport, whereas in my day it was difficult to get away from cooking a Sunday roast, not cycling around with a bunch of guys all morning. I have an extremely tolerant husband, who just took the kids around to his mothers for a Sunday roast!

Laughs aside I belong to a great Triathlon club that is full of awesome ladies and men competing in Triathlon. They inspire me to keep going, as age is just a number right? I wanted to speak up about my battle with UC, and maybe inspire others out there battling conditions that they think might stop them from achieving their ambitions. I say go for it. Give it a try. I always remember the Liverpool Tri, one of my favourite Olympic distance events; it was the ‘This Girl Can’ event and European qualifier. I was not at my best at my first one in 2015, but boy I enjoyed it so much and achieved an Olympic distance PB. I went back the year after for good measure. So many first time ‘Trier’s’ and so inspiring.

I hope you don’t find me rambling. It’s difficult to talk about a condition such as mine, but stomach/ digestive issues are a really big thing in our sport and if I can overcome them, then anyone battling a medical condition can there is something out there for everyone and the support from Tri is pretty unique. You are only in competition with yourself and everything else is just a bonus. I am already for the Welsh Triathlon Super Series. I have a deferred place on them all, so if Covid allows see you all on the start line.