How things all started, in the words of club member, Richard Clifford.

November 2004. Eminem and U2 had number one singles in the UK, Chelsea were riding high at the top of the Premier League and Wales finally came close to beating the mighty All Blacks, only losing by a point in Cardiff.

Meanwhile, in the waiting room of a doctor's surgery in Skewen, a group of like-minded individuals, all with an interest in multisport, gathered together for their first meeting. The venue was the work residence of Dr. Dean Hardie, who still remains a club member today, and on that day, a new club was about to be formed. Rose and Terry Jones, two very familiar and influential figures in Welsh Triathlon at the time, who later went on to establish Triathlon Coaching Wales, took the lead. Celtic Tri was born.

After deciding on the name and forming a committee it was former Wales rugby international Paul 'Arnie' Arnold, who designed the iconic kit that has become a familiar sight at races throughout Wales, the UK, and internationally. Sixteen years on and Paul is still the club's kit manager.

An official launch dinner was held at The Barn in Morriston in January 2005 and founder members in attendance who are still members today included Dr. Dean, Paul, and Jayne Arnold, Nikki and Matthew Powell, Tracey Williams, and Paul 'Sid' Wilkins. At the time, Terry Jones was the club's first chair and he’s since been succeeded by Ieuan Jones, Tracey Williams, and our current chair Mark Evans.

Over the next 15 years, the club has grown into one of the biggest in Wales with its core catchment area in and around Swansea, Neath, and Port Talbot.

Like all clubs, members have come and gone, but overall Celtic Tri has gone from strength to strength and currently has close to 300 members including a thriving junior section accounting for almost a third of that number. 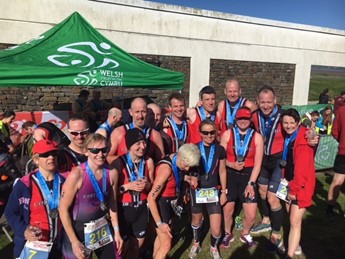 Amid all the smiles and cheers and honors, from Tristars through to GB age groupers, there have also been tragedies.

In 2015 one of our members Stephen Lewis, a serving police community support officer, was tragically killed in a collision with a motor vehicle while out on a training ride during a family holiday in Devon. Stephen, aged just 41, had been training for his second Ironman Wales and later that year club members gathered in Tenby to honor and remember him, his clubmates wearing black and red ribbons on their race kits as a tribute. With his children being members of the club at the time it was decided to create an event in his name - and the Stephen Lewis Tristars Aquathlon has become a regular fixture in the Welsh Tristars Series. Our junior kit also carries the ribbon on it as a lasting tribute.

In October last year, we were also left mourning former club member Garry Vaughan, also in his early 40's, who died suddenly leaving the whole triathlon community in south Wales in a state of shock. Garry was among a group of former Celtic Tri members who formed the Port Talbot Harriers multisport section and was a coach, mentor, and friend to many athletes.

As well as the Stephen Lewis Aquathlon, Celtic Tri also hosts the Swansea Junior Triathlon and the long-standing Neath Valley Triathlon, an event that has regularly introduced many people to the sport.

As the club has become established, over recent years, one of the biggest success stories has been the growth of the junior section. As a club, we are proud of putting on more dedicated training sessions than any other in Wales for our junior members and currently, we have a talented group who have enjoyed plenty of success on the Tristars circuit. We were also very proud to have the largest club representation in the series in 2018 and 2019.

During the lockdown, our committee and coaches have worked tirelessly to keep the members in shape with regular virtual sessions on the various training platforms. Zoom calls and Zwift meets have become the 'new normal' and have played a huge part in our physical and mental health, but hopefully, we may rediscover some of the 'old normal' in the not too distant future.

As a club, we have invested heavily in our infrastructure and can boast one of the largest qualified coaching teams in the country and our group of race officials, led by Phil Kethro, are also great ambassadors for the club.

As well as Welsh Triathlon we have an affiliation to Welsh Athletics and, as of this year, to Welsh Cycling to provide our members young and old with greater opportunities than ever before.

The past year has presented challenges which we could never have imagined as we entered what was to have been our 15th anniversary season and a special mention has to go to the committee members, coaches, and club volunteers who have risen to the challenge.

Chair Mark Evans, vice chair Tracey Williams, and Covid Officer Sam Perrott (who was to have served her first term on the committee as the social secretary before coronavirus forced a rather drastic change of title!) have all carried out their roles magnificently.

Mark Edwards, Richard Clifford, and Carl Creswell have ensured the junior section has continued to thrive in the most difficult of times, and thanks to all the other coaches and volunteers who have also played their part.

There have been many bumps in the road but Celtic Tri and its members will continue to swim, bike, and run for years to come and we will see you all at events across the country soon.