Kitzbuhel, Austria this weekend saw the European Sprint Championships, with 2018 Commonwealth Games team member, Olivia Mathias in action competing as a U23 in a mixed field with the seniors. The competition was over new heats & finals format of 500m/12k/3k, and she put in a comfortable performance on Friday to qualify for the final, which took place on Saturday. In the final, Olivia led the swim out to easily make the front group of nearly 20 athletes on the challenging bike course. She then finished off with a great run to take 5th overall, and the U23 silver medal. Backing up for the 3rd race in 3 days on Sunday, she was part of the gold medal-winning GB relay team. Taking over on leg 3, she pulled away from the German team to hand over in a clear lead, which was maintained to the end. You can re-watch any of the racing from the weekend on TriathlonLive (see if you can sport Olivia’s Welsh Limar helmet), and you can find the results here. 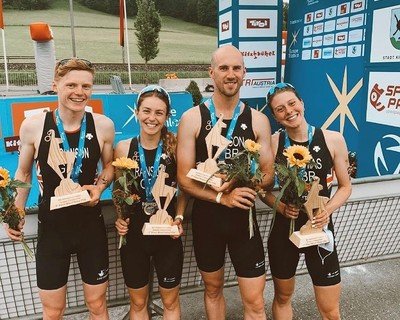 Over in Spain, Rhys Jones & Rhys James were also competing again in the Paratriathlon World Cup event in A Coruna. They put in an even better performance than last week in Besancon to finish 5th and take a huge step towards Commonwealth Games qualification. Results are here.

Closer to home, Josh Lewis was the winner at the Outlaw Half Nottingham, in his debut over the distance, just ahead of Swansea-based Andrew Horsfall-Turner, and Olympian and former World Champion, Tim Don who finished 3rd. Tenby Aces’ Finn Arentz also finished 7th, plus with Welsh domestic series regulars Alex Matchett and Oliver Simon in the top-20, it was a great day for Wales. Result can be seen here. 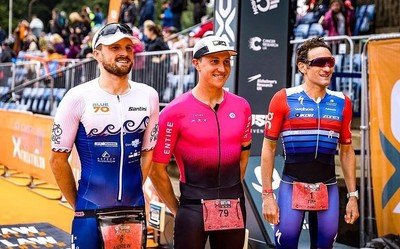