The Celtic Tri takeover brings us to Deborah Longman’s story. Deborah, also known as the ‘Unlikely Triathlete’ has turned adversity into a major positive through the sport, and become an author in the process. Here’s Deborah’s story in her own words.

Hi, I’m Deborah Longman, also known as the Unlikely Triathlete.  My journey within triathlon started 12 years ago, back in 2009 when I contracted swine flu.  Similar to the experiences of the current Covid-19 pandemic, most people who contracted the virus seem to recover.  However, I was one of the unlucky ones, and as a result, it damaged my heart (now healed thank goodness) and started shutting down my pancreas, making me diabetic (which I will be for life). 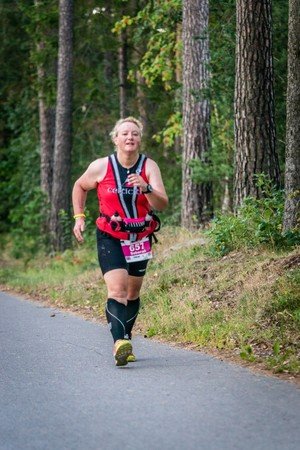 Following these setbacks, I had a few challenging years, and then, by chance, I met Joanna Roswell the day after the London 2012 opening ceremony. We were staying in the Celtic Manor resort at the time, and the GB cycling team happened to be located there also as they were training down the road in the Newport Velodrome.  This meeting inspired me to have a go at getting back on a bike.  I had last ridden a bike when I was 14 some 24 years earlier, but I thought “what the hell” and realised that I loved it as much then as I did as a child.

Triathlon for me finally surfaced a couple of years later in 2015.  A work colleague had signed up to do the Pencoed sprint triathlon. As this was a pool-based tri and relatively short I thought I’d sign up.  I could only swim doggy paddle and I hadn’t run since school, but that didn’t stop me.

It was when I was training for this event, by doing the couch to 5k, trying to enhance my doggy paddle technique and trying my best with my hybrid bike, that I found Celtic Tri! They adopted me with open arms and since then, I’ve not looked back.

I remember my first swim session and the astonishment of the coaches that I couldn’t really swim. I like to think that it was the most efficient Doggy Paddle stroke they’d ever seen! However, they were all amazing and soon got me to overcome my fear of putting my face in the water! They used to make me go home and practice in the bath!

Finally, the day of my first triathlon had arrived. However, I still did the swim doggy paddle as I couldn’t manage more than about half a length of front crawl.  Regardless of my swimming struggles, I absolutely loved the race and felt rewarded at becoming a triathlete. I instantly signed up for the Amman Valley sprint tri later in the season and since then, I haven’t looked back.

It was between these two races that my author journey started.  I had written a piece for the health and well-being group at work about overcoming my health challenges and taking up a triathlon.  By this point, I had already started my Unlikely Triathlete page on Facebook as some of my friends were getting bored of my timeline being flooded with exercise! When the health piece was published on our staff intranet, loads of people contacted me and said “you should turn this into a book” and so I did!

As a result, I now have 8 books in my Unlikely Triathlete series and I am currently writing book 9 about training and mental health during lockdown.

As for my personal triathlon journey, I just kept training, I became more and more confident with front crawl and eventually started open water swimming.  I changed my hybrid bike for a proper road bike. And my running distances started getting longer and longer.

So after two years, and adapting my efficient doggy paddle to a more orthodox front crawl, I made the decision to do the ultimate.  I became determined to become an Ironman, and I achieved this in August 2017, when I did Ironman Kalmar in Sweden. 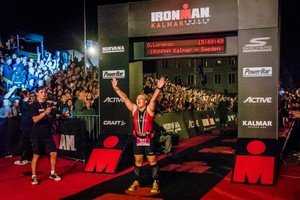 I know Tenby was on my doorstep, but I’m too chunky for the Tenby hills and I got to travel to a new country.

These past twelve months have been a challenge. I missed competing so much last year.  I will always be a back of the pack athlete, but I’m happy with that.  For me, triathlon is about keeping me mentally and physically fit and it’s about the friendships and team spirit of the sport.  I love volunteering as much as I love racing. Our club is one of a real community and I look forward to wearing the Celtic Tri colours as soon as possible. See you all at a race soon.