After what has been an agonising 15 months for event organisers and triathletes alike, triathlon racing returned to Wales on Saturday (June 12th) at the Wales Triathlon, Fishguard.

The event facilitated by Activity Wales Events was the final test event held across phase 2 for the Welsh Government, and it was also the Welsh Triathlon Middle Distance Championship for 2021.

After months of planning and consultation across various national and local government departments, the AWE team delivered, and with the sun beating down on Fishguard, the stage was set for racing to return. Athletes had been made aware of some of the changes which will be commonplace across Welsh events for the foreseeable future; race registration, changes to wave starts, transition placement, flow across the field of play, the lack of post-race presentations – these will differ from event to event depending on size and location, but the measures in place at the Wales Triathlon clearly demonstrated that multi-sport can be delivered, and social distancing maintained. 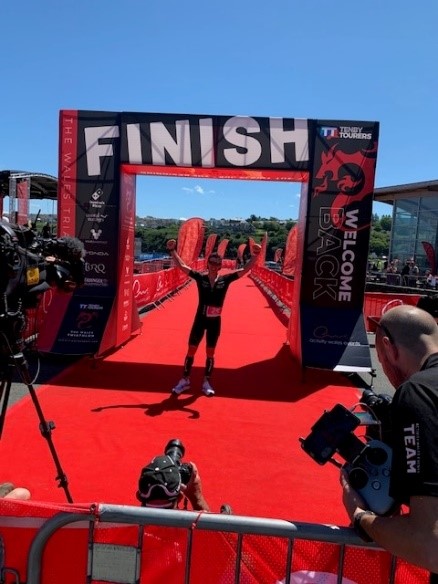 After organised registration, racking and water acclimatisation the race began on the hooter at 8:30, with athletes hitting the water two at a time, 10 seconds apart. As time progressed, the steady stream of athletes making their way around the breakwater, with the North Pembrokeshire coast and the sun glistening was a sight to behold, and one sorely missed over the last 15 months.

With the waves split in such ways, those exiting the water early were not necessarily ‘ahead’ in the race, and as the pink caps of wave 1 came thick and fast, the yellow and green caps of the following waves started to catch up with those in front. As the swimmers came to an end, they were welcomed by a vocal contingent of spectators and public members, all appreciative of the efforts of a middle-distance open water swim in what was the first official race back.

As the swimmers exited and entered T1, it was clear to see the prep in action, as over 400 participants made their way through transition without breaking any social distancing regulations. With all bikes out on course, the first bike returned to T2 having completed two circuits of the Goodwick-St David’s route a little prior to 11:30am, just within the three-hour mark. The fastest cyclist on course was Benjamin Goodfellow, and although in a different wave to fastest swimmer Nathan Ford, both athletes were almost neck and neck leaving T2 on the clock. It was almost a mirror image in the female race. Lead cyclist Joanna Callan had made up the six minutes to fastest swimmer Bethan Lance, and across both races, it was all down to the run.

By high noon, with the relentless sun beating down on athletes, the front runners were all eating into the half marathon, and as the rest of the age group field returned, the flow of athletes across the breakwater, all supporting each other after an absence of racing was uplifting. Club colours from all across Wales was evident, in what we hope will become a regular scene over the coming months as the domestic race calendar returns. 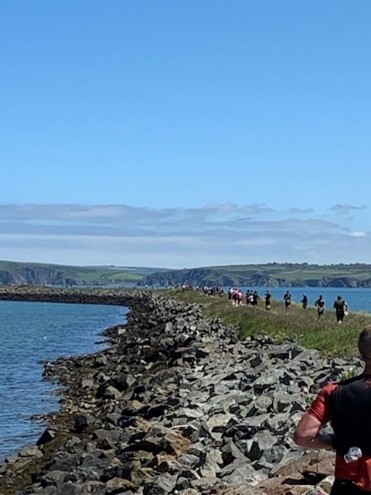 By early afternoon, there was a constant flow of finishers, happy with their days' work as they crossed the finish line, some of whom, it would have been the first time for over two years. The regulations however meant that those competing across age categories had to wait until the final athlete to finish before knowing the true outcome of the race. As the athletes crossed, the overall race results were clear, with Benjamin Goodfellow making the difference on the run, completing the half marathon in 1:19:15, pushing Nathan Ford into second place by 6 minutes. Third place went to Pembrokeshire local John Collier who was a further fifteen minutes behind Ford, with a finishing time of 4:25:26. The overall three were also the overall and senior male podium for the Welsh National Championships.

Within the female race, Joanna Callan cemented her strong bike leg with a run time of 1:35:43, and that 20 minute lead over second-place Bethan Lance all coming from the run leg. Caryl Williams completed the overall podium with a time of 5:30:34 in third and taking the veteran category within the National Championships.

A full rundown of the National Championship categories can be found below.

Welsh Triathlon would like to thank Activity Wales Events for their hard work in facilitating the test event and for hosting the National Middle-Distance Championships. With restrictions easing and events returning, we hope to see you all across the reminder of our domestic calendar, with the first Welsh Triathlon Super Series stage of 2021 taking place at Broadhaven on Saturday 10th July with the Pembrokeshire Coastal Triathlon, hosted by Pembrokeshire Triathlon Club.

Congratulations to all those who took away the medals across the National Championship age categories and to all of you who had not raced for some time. It was certainly good to be back!